The End of The Marketing Campaign as We Know It 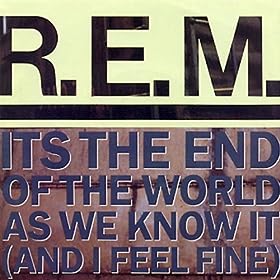 If you could imagine that line sung to the melody of REM’s It’s The End Of The World As We Know It (And I Feel Fine), I think you’d capture the feeling of the speakers at this week’s OMMA Global. The overarching theme of this show (and it has been pretty amazing) is that marketing has changed dramatically, and that there are new players, new paradigms, and new challenges, BUT this is the way marketing has always supposed to have been, and it has taken a century for technology to allow us to market the way that people really buy…

Jack Klues, CEO & Chairman of VivaKi gave a great presentation where he mentioned that the 2.2 BILLION consumers on the planet are in fact, your new co-workers. He went on to say that the the media market is like a canvas and the colors on the canvas, where earned and owned media are the most vibrant colors (extension of his canvas metaphor is entirely mine). Later at OMMA, at the terrific “Can Madison Avenue Step Up to the Social Plate” panel, Marita Scarfi of Organic, and Joshua Spanier of Goodby talked about the importance of content, and how today’s creative agencies are poorly positioned to provide the kind of “long form” content needed to live in the social world. During a follow-up question, I asked for some clarification on that, and the answer was that “long-form” content isn’t long in terms of words, or number of pictures or ads, but rather “long-form” means simply, that the messaging, especially in social, NEVER ENDS.

This might seem obvious, but in a 2-way conversation, the messaging never ends. As one think’s about Klues’ assertion that consumers are your co-workers, meaning they have an active part in your brand and they carry your message, and the realization that creative is poorly positioned to carry on the conversation, it is clear, the “marketing campaign” is dead. There is no longer a sense that messages and marketing, in a strategic sense, have a beginning and an end. The creative world has been put in a box by the marketers because marketers need schedules. We, as marketers, have trained the creatives that messaging has a beginning, and end, a measurable ROI, and it neatly fits in with our budget cycles and sales projections. And, it just doesn’t. It never has, we just pretended that it did.

The campaign is dead. This is conversation. This is a canvas of art. This is an exchange of ideas, concepts and aspirations that drive ahead engagement and fulfillment by and for the customer. Agencies & marketers need to stop thinking about what they can execute based on media buys Klues says that paid media is the least effective form of engagement, although it is the only form that scales. Scarfi and Spanier say that long-form is a never-ending story. The campaign, thankfully, is dead. Marketing isn’t a diatribe. It is a two way conversation that ebbs and flows, but it is the responsibility of the marketer to make all of the small talk to keep the consumer engaged.

And this is exactly how it should be. When we persuade the consumer to give us their attention (and money) we need to repay them and entice them with quality of conversation and value of content. No one ever invites back a dinner guest who can’t keep up their end of the conversation, nor will the consumer invite back a brand who has nothing worthwhile to say.